One of the most popular posts on this blog is my 29 life lessons learned in travelling the world (for 8 years straight). I've personally been to a couple of dozen countries, but then there are people like my friend Chris Guillebeau. He has been to every single country on earth!

I've met Chris on multiple occasions – in Thailand as my blog was just starting off, in his hometown of Portland for a coffee and his fun “World Domination Summit”, and then in Norway for his “end of the world party”, since he was celebrating having visited every nation.

Apart from writing two New York times best-sellers (both of which he was kind enough to mention me in!) he is a kind and wise person, so I am honoured to have him share his thoughts with you on the blog today. Over to you Chris!

Benny Lewis and I stood by the train tracks in Oslo, Norway, waiting to head out to visit Bergen. Both of us were experienced travelers, with Benny having visited dozens of countries and learning so many languages along the way.

Norway was a beautiful country, but for me it was something extra special: the final frontier. Over the previous decade, I’d followed a quest. The quest was to visit every country in the world—all 193 U.N. member states, with no exceptions.

I wanted to challenge myself…. and I’d done it! Victory came in the form of a $20 cheese sandwich (Norway is expensive) and a party with 200 of my closest friends.

After saying farewell and heading homeward, I eventually wrote a book that debuts around the world this month—but fortunately, the book isn’t just about my journey. The book is about quests in general. It’s about pursuing a big dream and being willing to risk it all.

So what did I learn along the way? Here’s a sneak peek into some of those lessons…

1. Unhappiness can lead to new beginnings

If you’re not happy with your life, or even if you feel a faint stirring to do something different, pay attention to the dissatisfaction. Ask yourself “What if” questions. What if I actually pursued that dream or idea? What if I made that big change? Discontent can be a source of growth and inspiration.

For best results, though, you’ll need to follow the discontent with specific action. Many of the people I met found a way to combine discontent with inspiration to create a quest: a world journey, a lifelong pursuit, or other big project.

By the way, discontent doesn’t necessarily mean you’re miserable. In many cases, it just means that you’re looking for something more in your life. Don’t ignore these feelings!

2. Not everyone needs to believe in your dream, but you do

Pay attention to the things that excite you and the things that bother you. In the book I wrote about Jiro Ono, the sushi chef from Tokyo who’s gained international fame for being extremely precise about the food he prepares. One of my favorite quotes was when he said he felt “victorious” over a particularly nice tuna.

I also met Miranda Gibson, who lived in the treetops of Tasmania for more than a year in protest of illegal logging. Miranda didn’t want to just start a letter-writing campaign or even march in the streets. She took dramatic action, and saved a whole forest.

When you set out to pursue a big dream, will your friends and family be there for you? Chances are that some will and others won’t. It doesn’t matter what anyone else thinks about your quest, but if you don’t have sufficient motivation to see it through, it will be tough going. You must believe!

3. Before beginning a quest, count the cost

In the early days of my journey to every country, someone criticized it by saying all it required was a certain amount of time and money. I later realized that this perspective could actually be helpful. If I clearly understood exactly what was involved in “going everywhere,” and if I then began working on each part of the goal step-by-step, it no longer seemed overwhelming.

In my case, the first half of the quest—the first 100 countries—cost me less than $30,000 USD. Just $30k! I don’t mean to suggest that $30,000 is a very small amount of money. But as an American, I often saw my friends investing that much money in a single year of graduate school education, or in some cases a car. For me, the legion of experiences I had in visiting 100 countries was well worth this expense, especially when paid out over time.

Whatever you choose to do, count the cost as much as you can.

4. Most of us are motivated by progress and achievement. Keep moving forward!

In the classic tale of adventure, Odysseus fought off sea monsters and escaped from an island prison—but he also endured a lot of boring days at sea. Most quests consist of a set of milestones that take a long time to reach. To stay on track, choose forward motion—keep making choices that bring you closer to the goal, even if it seems like reaching the end will take forever. 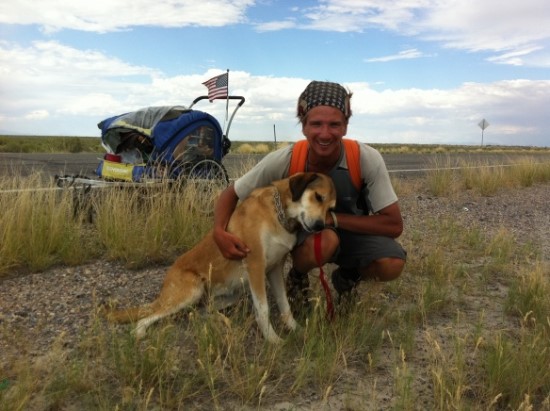 I talked with Nate Damm, who walked across America. When I asked how he did it, he said it was simple: all he had to do was put one foot in front of the other. I thought about Nate’s “simple” lesson many times as I finished my own quest. All he had to do was walk, and all I had to do was keep visiting countries. As long as I made continual, logical progress toward the goal, I knew I’d eventually make it to country #193 of 193.

5. Effort can be its own reward if you let it

I was fascinated to learn that successful standup comics Jay Leno and Jerry Seinfeld continue to have an obsession with practicing their sets in small clubs far removed from big cities. Each are focused on the effort, the process of perfecting a routine and remaining in top form even after they’ve achieved a tremendous amount of success.

6. Some adventures should be shared

Beginning from his home in England and continuing south through Sudan, Tom Allen had said farewell to the job opportunity and set out to cycle the world. When he fell in love and had to make a tough choice, he said that “a dream can have only one owner.”

But some challenges can be conquered jointly, and even if your quest isn’t a tag-team effort, chances are that a number of people will participate in your dream as you move toward completion.

Getting stuck, detained, shut out, or set back is never fun, but these experiences are a necessary part of the journey. When something goes wrong, strive to accept it as an investment in learning. Hopefully, you won’t make the same mistake twice… or at least, not over and over.

In my case, I damaged a rental car in Italy, was deported from Eritrea in the middle of the night, missed the only flight off a small island, and generally lost or forgot things all along the way. But the more mistakes I made, the more confident I became as I realized that most things would be okay and the worst-case scenario wasn’t all that bad.

8. As you make progress toward a small goal, the bigger vision expands

Many people featured in the book started with a small goal that grew in scope as it became more feasible. If you can’t picture a tremendous accomplishment at first, start with an achievable one.

Conversely, when you work toward a tremendous accomplishment, watch out: the next one may be even bigger. Quests have a habit of growing in scale and scope. When I reached the End of the World, Benny and I had a party to celebrate. I grabbed a vodka-soda from the bar as Benny had a soda-soda, and we celebrated with 200 awesome people who had also made the trek to Oslo.

A lot of things had changed since I first began the journey. The quest gave me confidence and a bigger vision for my life. I’d started as a solitary traveler, but ended surrounded by friends.

Oh, one more thing, in case it hasn’t been clear from the above post: the main purpose of the book (and this post!) is to communicate a message that extends beyond a collection of stories. That message is that a quest can bring purpose and meaning to your life.

If you’re discontented, or even if you’re happy but you want more from life, maybe it’s time to pursue a quest of your own.

Big thanks to Benny for having me here on Fi3M. I’m a huge fan! Thanks to all of you for reading as well. 🙂

And finally... One of the best ways to learn a new language is with podcasts. Read more about how to use podcasts to learn a language.

Guest Author
Guest Writer at Fi3M
Speaks: Various languages
See the article above for more information on this guest author.
View all posts by Guest Author

Start speaking your target language from day 1 with confidence!

Sign up for my FREE Speak in a Week email course by entering your details!

written by Benny Lewis
While I usually blog about language learning, I know a lot of you enjoy my travel and cultural updates as much or more. I've been travelling the world since 2003, but even forgetting the time involved, I have lived in twenty three countries (and counting); that's lived as in, spent at least a month (usually [...]

Benny travels China: the real point of the mission to speak Mandarin as quickly as possible

written by Benny Lewis
It's time to announce my next 3 month project, while clarifying what the real motivation behind my Mandarin 3 month project has been! I am going to travel deep into China – beyond 1,000km inland – by land (no flights), over the next two months, and then travel through Taiwan (outside of Taipei) for several [...]

10 Ways to Use YouTube as a Language Learning Tool

written by Benny Lewis
YouTube is an amazing tool for learning languages. That’s one of the reasons I have my own YouTube channel. In fact, I started posting videos on YouTube before I started this blog. Some of the videos were even in other languages! There’s only one problem with YouTube…there’s just so much there! The amount of content [...]

written by Benny Lewis
In an ideal world, you would have a native beside you every time you spoke or wrote something, so that they could help and correct you. This is not possible for many of us! Luckily, thanks to modern technology and the Internet, you can have your grammar and spelling corrected immediately and automatically, in any [...]

written by Nelson Dellis
I learned how to speak conversational Dutch in one year. And I had some amazing experiences as a result of this journey. It was a journey that began 10 years earlier, on a stage in New York City, with a pack of cards. One Mistake and You Were Out “Two of Hearts,” I confidently said. [...]

Check out Benny's Tips for Learning...